Recently, brands have been racing together to find new advertising ideas combined with technology to assert their brands in the market. For the first time in a Milo Marketing campaign aimed at increasing customer engagement and brand love, AR Filter was chosen for the campaign's mini-game.

Did you know it was an AR campaign?

Milo has created a Facebook filter theme called Milo that is used when taking pictures or taking selfies - this is an extremely popular AR form that we still use every day but somewhere we still don't know that it is Technology. Augmented reality (AR - Augmented reality).

Why did Milo choose the AR filter on Facebook?

This stems from the benefits of AR to users: For this project, AR filter has the following 3 benefits.

Users will play by using face tracking as in the instructions on the screen that pop up when opening the filter, then the content and images will appear.

The message that Milo's "Champion" is your children has been conveyed effectively, each child taking photos with Milo's filter will contribute to making the story lovely and positive. With pictures and content designed only for children, mothers will feel more rest assured when they let their children use and post their pictures on social networks. 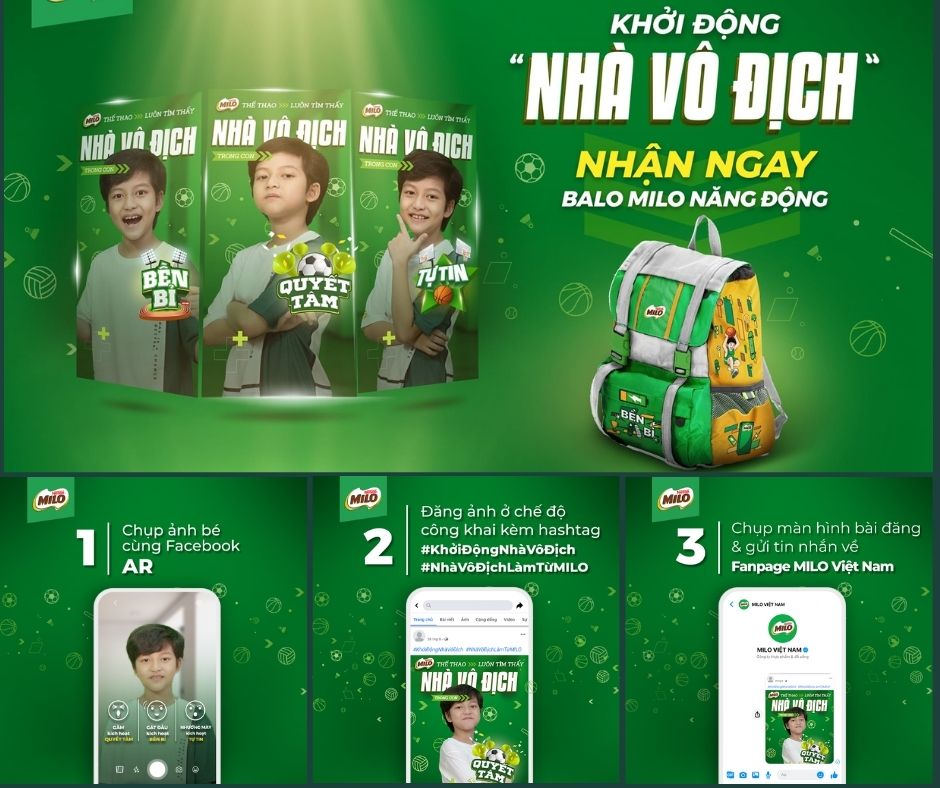 The campaign get a positive outcome

The ultimate goal that Milo aims for is the ease of access, participation and consumer focus, so AR filter has completely met these requirements. The campaign has reached more than 1000 people joining and sharing photos. Hundreds of Milo consumers have said they are interested in the new Milo campaign experience and await the next activities..

Choosing the right format of AR to deploy, Milo has received a positive response from the target audience of children between the ages of 6 and 12 who are willing to take pictures, so the criteria for ease of use must be placed on top but still ensuring beautiful and attractive images to attract children to interact.

The campaign was successful with more than 5700 buzz (like, comment, share), more than 10,000 relevant buzz and mention containing the keywords Khoi dong nha vo dich, by calling on participants to post photos on the website. In public mode with the hashtag #Khoidongnhavodich #NhavodichMILO with a short sharing about the value children have learned through sport while expressing their love of the campaign, brand and communication messages as well.

The campaign took Milo occupy No. 2 on YMI's rankings in July to surpass two major brands Vinamilk and TH True Milk in terms of performance on Social Media, topping the Brand Mention score with 70 points. It proves that consumers have more interaction with Milo's social networking site and the program's spread is also stronger than previous mini-game campaigns to receive gifts without using AR technology.

I'm Khang, Co-founder of Marvy Co. Our company is one of the first and the biggest AR/VR developer in Vietnam. With years of experience in developing AR effects, I hope my knowledge can help agencies and brands understand more about AR and how to use it to boost your marketing campaigns.

How can your marketing strategy use AR Filters ?

AR Face Filter - the new race of Brand and Marketers